Meghnath’s hope for fulfillment is justified!

Meghnath Pradhan at the age of 20 years has been through more than what many people experience in a lifetime He belongs to the Kuchai village in the Seraikella district of Jharkhand, is a college student, and from a family of four, who small farmers are.

Four years ago, he noticed a small, pale patch on his left hand, which he ignored, thinking it would go away on its own. But, it became worse and spread all over. Soon he found loss of sensation and weakness in his left hand. His fingers became curled.

He went from doctor to doctor. Every time he was misdiagnosed and given wrong treatment. Finally, on the advice of a local doctor he approached Damien Foundation hospital at Amda in Jharkhand. He was given appropriate treatment for leprosy. Soon his disease was cured but the deformity remained. He saw himself isolated by his friends and community and could not find a job.

The health worker from Damien Foundation told Meghnath that his deformity could now be corrected through surgery at the Damien Foundation hospital in Amda. He said, “I was in despair, now I see a hope in life” It is this hope that keeps him going, hope that he would be accepted by the society as a respectful person and he would be able to stand on his own feet.

We can make this happen, with your kindness and financial help. 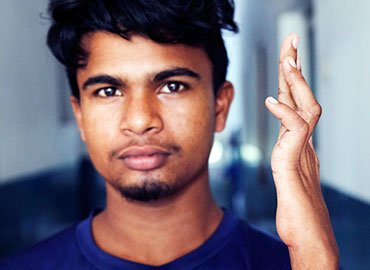 Your donation of Rs. 50,000 ($750) will cover the surgery which includes the services of surgeon, operation theatre, medicines, anesthetist, physiotherapy, food and hospitalization for 2 months.